Shungite is a mineral found near the tiny village of Shun'ga in Russia.  It is understood to have formed naturally over two billion years ago and has been used in healing therapies for millennia.  It contains the majority of elements in the periodic table and is comprised of hollow carbon-based molecules called fullerenes for which discovery a Nobel Prize was awarded in 1996.   There have been many double-blind scientific and medical studies on shungite for its qualities and health benefits.

Shungite has been shaped into jewelry and protective stones for many years but more recently, through a unique patented process, has been turned into stones that can be used as electrodes when connected to a hand-held device such as a the NES miHealth PEMF device. ​

ARP Health Systems uses these electrodes for a facial treatment which helps to strengthen the muscles in the face and neck resulting in a more youthful appearance.

Electrical stimulation for training of facial and neck muscles is much more effective than exercises and massage.

It is known that training of muscles works if their exertion (constriction) succeeds in taking turns with their full relaxation. Quantity of iterations between constrictions and relaxations is the second key to the efficiency of such training.   The NES miHealth device with the Shungite Electrodes attached accurately allows the body to fulfill constriction-relaxation of muscles in a certain area of face, which is practically impossible with exercising.  Besides, electrical stimulation of skin and facial muscles improves blood circulation, oxygen inflow, nourishing of tissues, and their detoxification, i.e. enhances metabolism.

The NES miHealth is a powerful hand-held PEMF (pulsed electromagnetic field) biofeedback device that is non-invasive and effective for reducing stress, releasing and re-educating energy flow, muscles, nerves, organs and areas of the body. As stress is released, energy can flow properly and the body's own innate intelligence starts to heal itself.

BUY THE miHEALTH AT THE BEST PRICE EVER

After Injuring 2 Veterinarians, a $ Million Dollar Raging Bull is Calmed Down with the miHealth Device

The miHealth is Used by
Medical Doctors

The miHealth helps to retrain your body's own healing system by communicating specifically with the parts of the body with which it is in contact. The device does this primarily by sending ultra-weak electrical signals, to the spot it is in contact with, and then “listening” to the body’s response from those signals.

Bioelectric biofeedback therapy is known to help reduce stress and re-educate parts of the body and mind to healthier patterns which can lead to a better quality of life.

The goal is to get your body’s energy flow back to operating with maximum efficiency. Because the body can easily get trained into “patterns” where the energy becomes sluggish or stuck, rejuvenating the body’s energy flow is critical — as it both releases stuck patterns which clear the way for the body's own healing system to take over.

GET YOUR miHEALTH NOW!!!

GET YOUR miHEALTH NOW!!!

The NES miHealth Helps With

I believe the miHealth is an amazing health technology unlike any other that exists.

I use it on a daily basis and I know that you will find innumerable uses for this revolutionary device unlike any other.

And when you consider the detoxification, rejuvenation and long-term cellular benefits... I believe it’s one of the wisest investments you’ll ever make.

I use a miHealth with all my patients to help with their pain. I work primarily with patients that have suffered burns and need head and facial reconstructive plastic surgery. Using the miHealth, my patients have reduced pain post surgery and their burns heal 50% faster.

I liken bioenergetics [upon which is miHealth is based] to a child's development in the uterus. When the egg is first there, there are signals, they come from the source. I'm not sure where that's coming from, but it's our intrinsic development of the egg into a being, and there are signals...

What the miHealth does is it works along a similar fashion. It allows the body to receive via signalling, energetic signals, just like it had when it was developing. These signals cause a change in the body’s energy field, and then a change in the physiological processes.

That's more basic than biochemistry, or working with just one specific chemical compound, trying to energetically change, say the mitochondria or foods that are going to pull energy for the body, it's different.

Because the miHealth provides a signal for the body to heal itself. What's hard to understand is it really doesn't do anything except provide the signal. The body does everything else.


I'm Anna Anderson. David Matthews, MD and I work together in a practice. David is a craniofacial reconstructive plastic surgeon. We both use the miHealth in this medical practice with our patients to reconstruct facial trauma in burn victims.

I have an extensive background in alternative medicines, everything from Ayurveda to ... I'm a food scientist and use many modalities of energetic medicine. We work together in the practice. I work mainly on emotional issues and traumas.

With my extensive background in yoga and alternative medicines, when you have blockages in meridians, your body cannot heal, it cannot function. The frequencies from the MIHealth plays a huge role with the meridians, but what I find that is fascinating with the MIHealth is knowing what I do know about the meridian pathways, our nervous system ... The nerves follow the meridian pathways as well. So when you're activating the nerves, and I use the nerve on most every case I work on because it is right along the pathways of the meridians, and it sends signals to unblock these ... Works very similar to acupuncture, but I think even more effective.

How the NES miHealth Works 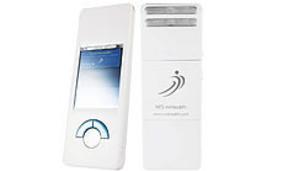